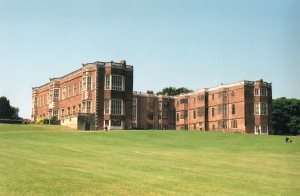 Temple Newsam is a wonderful stately home located just outside of Leeds. It is 4mi est of the city centre, between the neigbourhood of Whitkirk and the M1. The house has connections with many events in British history. It is one of the most interesting places to visit around Leeds, and it should not be missed when staying in the city.

Temple Newsam owes its name to the Templar Knights who established a commandery on the site in the 12th century. They disappeared in the 14th century and the estate passed to the local aristocracy. A house was built in the early 16th century for Philip Darcy, who was executed shortly after for taking part in the Pilgrimage of Grace against Henry VIII.

The estate was then seized by the Crown and the King gave it to his niece the Countess of Lennox. She was the mother of Lord Darnley, who married Mary, Queen of Scots. After the fall of Darnley, Temple Newsam was again seized by the Crown. It was eventually bought by the Ingrams, who rebuilt and extended the house in the 17th century. The two lateral wings were later restored in the 18th century, but the whole building has always kept its initial Tudor appearance. Its brick facades and its size give it the nickname “Hampton Court of the North”. It was bought by Leeds City Council in 1922.

Most of the rooms inside of the house can be visited, from the Great Hall on the ground floor to the attics. Each part of the house presents a different style and period, from the Tudor times to the Georgian and Victorian eras. Although the exterior is pretty plain and unassuming, the interiors are lavish and beautifully preserved.

Temple Newsam has a rich collection of paintings, which can mostly seen in the wonderful picture gallery. The house can almost be visited as an art museum, for many periods and countries are represented, from Dutch, Italian and French masters to local portraitists. There are some works by Reynolds, Lely and Stubbs.

The park was designed by Capability Brown in the 18th century, and as such it is a perfect example of the English park. It is huge, with woods, meadows, hills and a lake. The lake is surrounded by a magnificent collection of rhododendrons, and it is just magical when the plants are in full bloom (in May). The walled garden is equally wonderful, with a large rosary and superb greenhouses.

Cherry on the cake, the estate also has a farm where visitors can see pigs, sheep, goats, cattle and ducks. It has a focus on rare breeds and it is supposed to be the largest working rare breeds farm in Europe. There are Manx sheep, and Shetland and Hereford cattle among others. There is also a ‘Go Ape’ tree top adventure centre on the grounds.

The grounds are free of charge and are open daily. The house and farm are closed on Mondays. Tickets can be bought at the stables, where there is also a nice café. There used to be three types of tickets, with a combined one to visit both the house and the farm, and separate tickets for each, but they do not seem to exist anymore. Full-price tickets for the house and farm costs £10.00. See the website for more information. Temple Newsam is not easy to reach by public transport as the nearest bus stop is a 20min-walk away. It is on New Temple Gate and it is served by buses 8 and 19. It is also possible to take a bus to Whitkirk (8, 19, 19A) and then walk to the estate (30min).