Ledston is a charming village, located 10mi southeast of Leeds, between Kippax and Castleford. It is not one of the most famous tourist attractions in the area, but you should definitely visit it if you are into old stately estates and dilapidated historic houses. It has one of the most charming houses in Yorkshire, Ledston Hall. Unfortunately, it was divided into flats and it is not in a great condition, but it remains a stunning example of Jacobean architecture.

Ledston Hall was built almost at the same time as nearby Temple Newsam, so it is quite similar. It is a bit more modern though, because there is some Baroque influence. The outside is very regular but the whole building was built in many phases from the Middle Ages to the 17th century. The oldest element is the chapel, which was built by monks from Pontefract in the 12th century.

The estate has changed hands many times in its history before it was acquired by the Whelers at the turn of the 18th century. It is now in the care of a private foundation. The gardens around the house have somehow kept their 18th-century appearance. There are charming beech hedges, two statues, two lovely lodges at the entrance and views on the surrounding countryside. Curiously, the park itself is not located around the house, but  it is detached and located further north. It had to be reached via a long ride. The inside cannot be visited, but the garden is open to the visitors on weekdays in summer, see website. 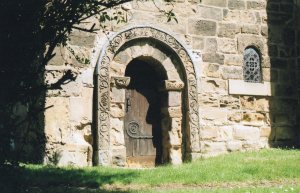 About 2mi from Ledston is Ledsham, another charming little village. It used to be part of the same estate as Ledston. The church there is very ancient as it dates from the Saxon period (8th century). It was enlarged many times afterwards, but many elements do date from that period. They include the South wall and the small door which can be found on the tower. Inside, you can see on the West wall a stone with the carving of a butcher’s knife, which was part of a Roman altar. You can also see the funerary monuments of the owners of Ledston, which date from the 18th-century.