The Civic Hall on Millennium Square.

Leeds is the typical Northern English city. It grew in the Georgian and Victorian eras thanks to industry and it has constantly regenerated so it is not particularly rich in old monuments. It can even seem to be without interest for the visitor at first sight. Its rich industrial and trading history has however left some grand buildings and squares. The city centre and some suburbs are also dotted with less obvious sights that are just waiting to be discovered.

The main place of interest in Leeds is obviously the city centre, with its Victorian buildings and the old warehouses along River Aire. If you want to see more of Leeds, you can go to Holbeck, a former industrial area just behind the train station, and discover the Leeds and Liverpool Canal. Leeds has some very fine parks, including the huge Roundhay Park, located in the nothern suburbs. The ruins of Kirkstall Abbey, and the lavish estates of Temple Newsam and Harewood House are not to be missed. If you just want to visit the city centre, half a day may be enough, but you can easily spend two days in Leeds if you want to explore the museums and surroundings.

Leeds is famous in the North of England for being the perfect spot for shopping. Its main street, Briggate, is surrounded by large department stores and shopping malls, including Trinity Leeds, one of the best shopping centres in England. Briggate has been Leeds’ highstreet since the 18th century. It was then a flourishing trading place for cloth. It runs South to North, starting from Leeds Bridge on River Aire, and its name actually means ‘bridge street’.

Most of the buildings on Briggate are recent but if you look closely you will see several perpendicular alleys that date from the Georgian heydays. Most of these alleys lead to very old pubs – Whitelocks, Packhorse, Angel, The Ship – that originate from that period. It is quite easy to imagine them filled with cloth traders and travellers.

Some of the alleys were replaced with shopping arcades in Victorian times. These arcades – which are definitely one of Leeds’ wonders – are worth a look for their original architecture. The oldest one is Thornton’s Arcade, built in 1878. Queen’s Arcade was completed in 1889 while County Arcade, the largest and grandest, in 1900. County Arcade is especially interesting since it is very typical of the Victorian architecture from Leeds – its walls are covered with faience just like many other buildings in the city. This faience was produced by Burmantofts Pottery which closed in the 1950s.

Towards the North, Briggate ends with New Briggate. That part is less opulent and quite dilapidated in parts. It has however the Grand Theatre, built in 1878. There is also another arcade, Grand Arcade, built in 1897, and the oldest church in Leeds, St John’s. It dates back from the 17th century and the inside is worth a look for its wooden beams and sculptures. East of Briggate you should not miss Leeds Kirkgate Market, a beautiful Victorian covered market.

Walking from Kirkgate Market and towards the Aire, you should find the Corn Exchange, an incredible oval-shaped Victorian building. It is now a shopping centre for independent retailers. Behind it the smaller building with a bell-turret is a remain of a White Cloth Hall which was built in 1777. It was partly destroyed to build the railway that passes behind it. Leeds also had a Coloured Cloth Hall which was located near the actual train station. 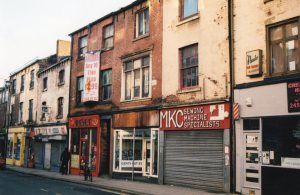 Kirkgate is the oldest street in Leeds. It comprises many Georgian houses and the First White Cloth Hall which dates back from 1711. Unfortunately it is very dilapidated and a wing is missing. At the end of the street stands Leeds Minster, which was rebuilt in the 19th century. Now that it is separated from the rest of the city centre by the railway, that part feels a bit off-centered but it is the place where Leeds was born in the Middle Ages. 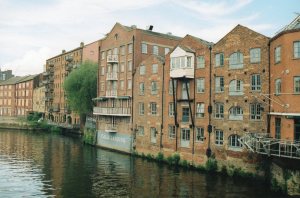 Between the Minster and the Aire stand The Calls, a former industrial area comprising many nice old warehouses. The oldest ones date from the 18th century. On the other side of the river, other warehouses can be seen along Dock Street. If you walk along the river towards the East, you can easily reach the Royal Armouries Museum and Leeds Dock, while if you go westward you’ll reach the train station and the Leeds and Liverpool Canal. 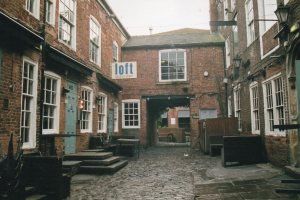 The lower part of Briggate is where most of the bars and nightclubs are located. Unlike the pedestrian part of Briggate, it has retained many historical buildings and it is bordered by several ‘yards’ which were used to prepare cloths before they were sold. The nicest one is probably Queen’s Court, which dates from the early 18th century. There are also Blayd’s Mews, Lambert’s Yard and Hirst’s Yard. Lambert’s Yard boasts the last wooden house in Leeds (16th century).

The street ends on Leeds Bridge, the oldest bridge in the city, rebuilt in the 19th century. Near the corner between Lower Briggate and Boar Lane there is the Time Ball Building. It has an interesting Victorian facade dating from 1872. The main clock is topped with a ball which used to drop at 1pm each day just like in Greenwich. 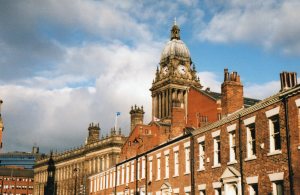 On the other side of the centre stands the Town Hall, a huge Victorian building which is hard to miss. Its square tower is particularly impressive. It was completed in 1858 and the official opening was done by Queen Victoria herself. It contains an enormous concert hall as well as former courts and cells. Behind it is the Civic Hall, built in the 1930s to house the City Council. 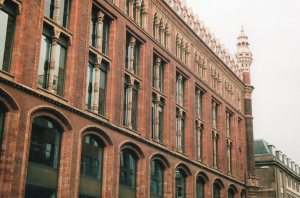 Going back to the train station, you can have a look at Park Square, a lovely Georgian square. It is surrounded by nice Georgian terraced houses and there is also St Paul’s House, a great Victorian warehouse that was inspired by Moorish architecture. The area was developed in the late 18th century to house the local elite, but the rise of the industry meant that the conditions of living deteriorated so the rich eventually moved out of the centre to avoid the smoke and noise. The houses around Park Square were subsenquently converted into offices and warehouses.

Besides the city centre, some areas in the suburbs are worth a visit. Leeds’ largest park is Roundhay Park with over 700 acres. It used to be part of a stately estate and it is the perfect English park, with distant views, lakes, large lawns and woods. The 19th-century house still stands in the upper part of the park and there are various follies including a mock castle and a rotunda. Behind the house and across the roads visitors can also enjoy several wonderful gardens. One is a copy of the Alhambra Garden and another is inspired by Monet’s garden in Giverny. Roundhay can be reached from the centre with buses 2 and 12.

Next to Roundhay Park there is Tropical World, a small zoo that focuses on plants and small animals. The visit starts with a large butterfly house and then there are smaller rooms dedicated to snakes, frogs and fish. There is a large greenhouse populated with tropical birds and tropical plants. The place also has monkeys, bats, meerkats and turtles. Full-price entry £6.20, see website.

Armley Park, which overlooks the Aire and the canal, is another former stately estate. It was created for the Gotts, who were the richest family in Leeds in the industrial era. The family started with Benjamin Gott, who founded Armley Mills (now the Leeds Industrial Museum). The family house can still be seen in the park. Armley Park can be reached from the centre via the canal towpath (an hour walk) or with buses 14, 72, 85 and 87.

Golden Acre is located well outside the city, on the road to Otley and Ilkley. It was created in 1932 to serve as an amusement park. It has a lake and all kinds of plants, with a rock garden, a Mediterranean garden, a large dahlia collection, and greenhouses. It also has several national plant collections. It can be reached with buses X84 and X85.

St John the Baptist in Adel.

Not far from Golden Acre is Adel, a wealthy suburb that has a very interesting church. It dates from the 12th century which means it is one of the oldest in the region. The porch is stunning, with nice Norman carving, including typical zigzag patterns. Next to it is York Gate Garden, a private garden open to visitors (full-price entry £6.00, see website). 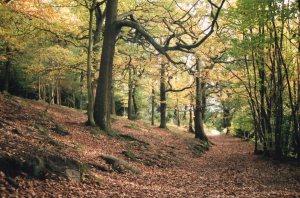 Adel can be reached by bus. If you want to enjoy a nice long walk through the city but among trees and fields, you can follow the Meanwood Valley Trail which starts from Woodhouse Moor near the city centre and ends at Golden Acre. It follows Meanwood Beck and as it runs at the bottom of a deep valley, it is mostly hidden from the surrounding suburbs. It goes through some nice parks and public gardens, such as Woodhouse Ridge, Meanwood Park, The Hollies and Adel Wood.

The Leeds and Liverpool Canal near Armley Mills.

The Industrial Museum and Thwaite Mills are two great places to learn more about the former local industries (see Museums in Leeds). Otherwise, the city has a rich industrial heritage that can be explored on foot, especially in Holbeck near the centre and along the Leeds and Liverpool Canal.

The canal was completed in 1777 and it greatly helped Leeds to become one of the largest industrial cities in England. It meant that it could be reached by boats straight from the Atlantic Ocean – eastwards the Aire and Calder Navigation, completed in 1704, ensured that Leeds could also be reached from the North Sea. The canal is still well preserved and it still has its original locks and bridges. The towpath can be explored on foot or cycling and it is a great way to reach the Industrial Museum at Armley Mills and Kirkstall Abbey. If you go further out of the city, you can cycle to Saltaire, a former mill town that was designated a World Heritage site.

The best place in Leeds to spot nice old factories and warehouses is Holbeck, a small area that is located just behind the train station. This is where the canal meets the Aire and it used to be an important inland port. Holbeck also contains some of the oldest factories in Leeds – many buildings date from the 18th century and are of national significance. The greatest sight is Temple Works, a former flax mill that was inspired by the Temple of Horus at Edfu. Apart from its stunning mock-Egyptian architecture, Temple Works was also very unusual for sheep used to graze on its roof. It was covered with grass so the building would keep its humidity to ensure the linen threads did not dry out. Temple Works can be found on Marshall St.

Not far from it, on Globe Road, are the three chimneys of Tower Works. The factory used to produce steel pins for the textile industry. Each of the three chimney is a copy of an Italian landmark – highlighting the British taste for anything Italian in Victorian times. The tallest was based on the Campanile in Florence, the second is a copy of a tower in Verona and the shorter one was inspired by a Tuscan house in San Gimignano.

Also in Holbeck, Foundry Square is a group of old industrial buildings that were converted into office spaces and housing. The buildings belonged to a large factory founded in the late 18th century which produced steam engines.

On the other side of the Aire, near Wellington Street, there is a large square tower, called Central Station Lifting Tower. It was built in 1846 and was used to lift goods trains. 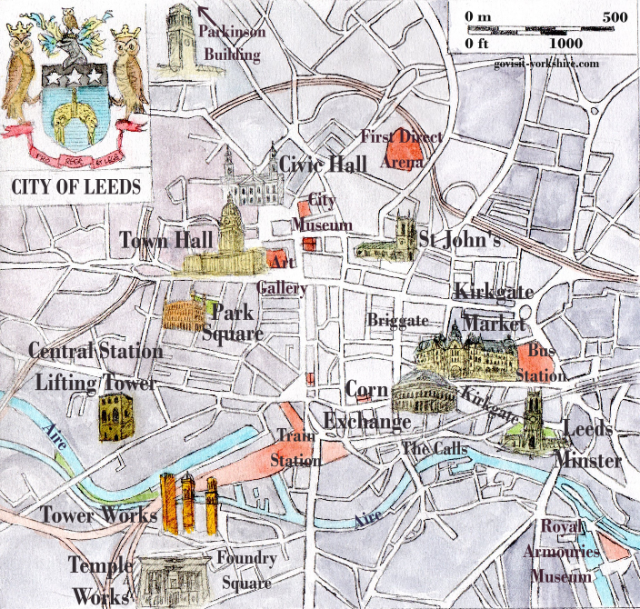 Back to the Leeds page