Haworth is one of the most famous places in Yorkshire, despite being a small village tucked away in the Pennines. It was home of the Brontë sisters, who rank among the best-known English writers and it is now a kind of a literary mecca, attracting visitors from all over the world. Charlotte, Emily and Anne Brontë spent most of their lives in Haworth, where their father was the local parish priest.

The sisters were heavily inspired by the village and its surronding moorland, and they wrote most of their novels in Haworth – including Jane Eyre and Wuthering Heights. The Brontë sisters were not born in Haworth though, but in Thornton, a village close to Bradford. Charlotte and Emily were buried in the church at Haworth, but Anne’s grave is in Scarborough in the coast.

Although Haworth was a small and remote village at the time of the Brontës, it became more and more industrialised though the 19th century. Just like in most of the villages in the area, cotton mills were opened around the river and the new train station, and Haworth eventually became a small town. Nowadays, when arriving in Haworth, visitors usually see first the Victorian part, with its park and high street. However, the old village up the hill has retained all of its charm and it has been very well looked after. The surrounding moorland is also just as gorgeous as it was in the days of the Brontës.

HOW TO GET TO HAWORTH

The train station in Haworth has closed to normal traffic and it is only served by the steam trains of the KWVR heritage railway. Trains depart from Keighley train station which is 3.5 mi away and which is served by regular services from Leeds and Bradford. The KWVR railway only works in high season and tickets are more expensive than on the regular network (see the railway’s website for details).

From Keighley, it is also possible to take a bus to Haworth (BrontëBus). There is also the 69 which directly links Bradford to Haworth. If coming by car, there is a car park on North Street, very close to the old village centre (pay and display).

The most famous sight in Haworth is probably the Brontë Parsonage Museum, which is set in the house where the family lived. The building has mostly remained as it was in the early 19th century, and visitors can also enjoy its garden which faces the church. Inside the parsonage, the rooms have been carefully redecorated as they were in the days of the Brontës. Visitors can see the kitchen, study, parlour and bedrooms. There is an exhibition with dresses, manuscripts, letters and other objects that belonged to the family. The museum is open daily, full-price admission £9.00, see website.

Aside from its literary connections, Haworth is a very interesting place. It is a picturesque Yorkshire village, with its cobbled Main Street and its dark stone houses. The street is lined with souvenir shops and tea rooms. It leads to a characterful little square on which stands The Cabinet of Curiosities, a former Victorian apothecary shop which has been converted into a shop selling soaps and beauty products. Inside, the furniture was salvaged from various Victorian shops. Branwell Brontë supposedly used to buy his laudanum here.

The local church, St Michael and All Angels’, is definitely worth a look for its close connection with the Brontë family. Patrick, father of the three sisters, was the Reverend from 1820 until his death in 1861, and all the members of the family – save Anne – were buried there. Unfortunately, the church was completely rebuilt in the 1880s and as such it is not the one that the Brontës knew. Their grave can be seen in the Brontë Memorial Chapel, located at the right of the chancel.

Haworth is one of the best places to enjoy a walk in the gorgeous Yorkshire countryside. The village is located in the Pennines and it is surrounded by vast expanses of moorland, peaceful pastures and miles of dry stone walls. The Brontës’ moors, which are located just a short walk away from the church, offer splendid views over barren landscapes. 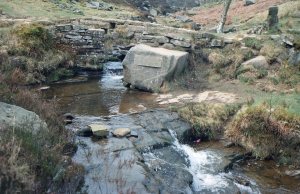 The Guardian offers a very good walk on its website. Around 4mi-long, the walk gives a very good overview of the area, with its moorland, waterfalls, reservoirs and small villages. It goes along pathways walked by the Brontë sisters and it is an opportunity to discover the places that inspired them. It starts in the village centre, then goes uphill to the Brontë Waterfalls and then Top Withens, a ruined farm which could have inspired Wuthering Heights. It then goes back to Haworth via the nice village of Stanbury.

The area around Haworth is often called the ‘Brontë Country’. Fans of the Brontë sisters can visit many other places associated with them, including Thornton, the village where they were born. Closer to Leeds, there is also Oakwell Hall, a Tudor manor which inspired Charlotte’s Shirley. A long-distance footpath (43mi), the Brontë Way, goes all the way from Oakwell Hall to Lancashire, via Haworth off course.