Bradford is the second-largest city in West Yorkshire and it is often considered as the sister city of Leeds. The two are very close to each other and they look similar. Bradford is a bit different in terms of architecture though – here buildings were constructed with yellow sandstone, while Leeds is a city made of bricks. Leeds is also much bigger, although in the Victorian era the two were similar in size. Bradford is well-known in England for its large Media Museum, and for its large Pakistani population.

Bradford remained a small town until the 19th century, when it boomed thanks to the textile industry. It quickly became one of the world centre for wool trading, and its cotton mills attracted immigrants from Ireland, Germany, and more recently from Pakistan. The local industry collapsed at the end of the 20th century, leaving an impoverished and derelict city. The city centre since then has witnessed many redevelopments, but Bradford is far to be as dynamic as Leeds. 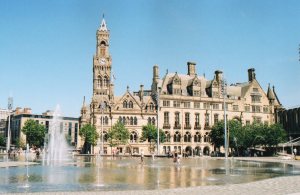 Bradford is part of the few cities that do not have a river. As a result, it lacks a sort of deepness and freshness. The city centre is quite ordinary and its architecture is very typical of the Victorian era. Unfortunately, many buildings of interest were lost during the 1960s and 1970s. These include the old stations at Forster Square and Bradford Exchange, which were replaced with much smaller and insignificant buildings. Forster Square has nonetheless kept its former hotel, The Midland, dating from 1890. 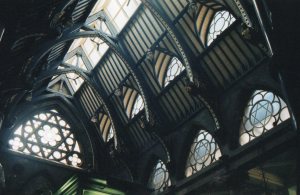 The former Wool Exchange, which was once one of the biggest wool markets in the world, now houses the local Waterstones bookshop. Although the building is not that remarkable from the outside, the inside is well worth a look. The ceiling, with its Neogothic beams and coat of arms, is quite impressive, and the place is definitely one of the most beautiful bookshops in the UK. Bradford has a small Cathedral, which was a mere parish church until 1919 when the local diocese was created. The oldest parts of the church date from the 15th century. Some of the windows were designed by William Morris, assisted by Rossetti and Burne-Jones.

Lovers of Victorian architecture, and of industrial history, can have a walk in Little Germany, a small area located below the Cathedral. The huge buildings that still stand there were built in the 19th century to serve as offices and warehouses. Most of the owners were German Jews, hence the name of the neighbourhood. Bradford still has a small synagogue, which was built in the 1880s (located north of the centre, on Bowland Street).

Well outside the centre, on the way to Saltaire, stand Lister Mills, a huge factory which once was the largest silk mill in the world. It has been converted into flats and offices, and the tall chimney has become a local landmark. Bradford boasts a beautiful Victorian cemetery, called Undercliffe, where some scenes from Peaky Blinders were shot. 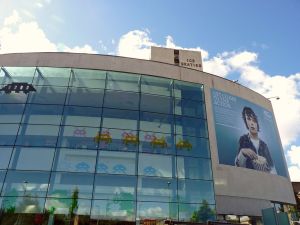 The main visitor attraction in Bradford is the National Science and Media Museum, which is one of the biggest museums in the North of England. It is located near the City Hall, south of the centre. It was first created as a Media Museum, dedicated to television, film, photography and IT, but in 2016 it shifted its focus towards science and had its name altered. The change is quite a pity as the museum lost many of its interesting rooms. For instance the ones with the TV sets have been replaced by more ordinary exhibits about light and sound. However the museum has retained its exhibits about the history of TV in the UK and the history of the internet. There is also a large exhibition – sponsored by Kodak – of old cameras. Free entry, open daily, see website.

In the suburbs of Bradford there is also Bolling Hall, a beautiful Tudor manor.