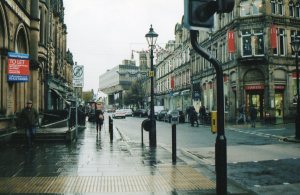 Halifax is an industrial town located at the foot of the Pennines, on the western edge of Yorkshire. It developed during the Renaissance as a trading place for wool and it later became a large mill town with the Industrial Revolution. Cotton and woollen mills remained the largest employers in town until the last decades of the 20th century, when the textile industry collapsed.

Although it was primarily a place for textile production, Halifax was also the birthplace of two leading British banks – Halifax Bank and Yorkshire Bank. It is also home to the Quality Street confectionery company, which still has its plant near the train station.

As with many towns in this part of Yorkshire, Halifax is now quite a deprived place. Although it may seem dismall at first sight, Halifax however has quite a few places of interest.

The town centre is very Victorian as well as very typical of West Yorkshire, with many buildings constructed with the local distinct yellowy sandstone. The Borough Market, an indoor market completed in 1895, is very similar to the Leeds Market. The Town Hall, which looks quite odd with its pyramid-shaped clocktower, was designed by Sir Charles Barry, architect of the Houses of Parliament in London.

The main place of interest in town is the grand Piece Hall, a cloth market built in 1779. It forms a huge courtyard surrounded by columned galleries on four sides. The galleries comprise more than 300 rooms, in which merchants would sell their cloths. The rooms have been turned into independent shops, bars and art galleries and the place is quite trendy, with souvenir shops, hobby shops, cloths shops and the like. The Piece Hall is overlooked by the tower of Square Church which houses a cultural centre. The tower was added in 1855 and it is Neogothic, but the church itself is a brick building dating from the 18th century. 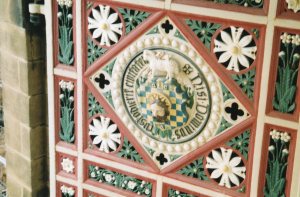 The main church in Halifax is Halifax Minster. It dates back from the 15th and 16th centuries. The outside is quite dark and bleak, but the inside is bright and rich in terms of decoration. There is a nice painted ceiling and box pews dating from the 17th century.

Outside of centre stands Wainhouse Tower, which is 275ft high. It was built as a chimney for a dye work but it was never used as such and its owner had it transformed into a folly for his estate. Viewing platforms were added at the top. It is open on bank holidays (see website).

Just north of the town centre, there is a noisy flyover as well as a nicer Victorian bridge, completed in 1871. Just behind stands Dean Clough, once the largest carpet factory in the world. It still comprises around ten different buildings, spanding over half a mile. The complex, once known as Crossley’s Carpets, was built in different stages from 1841 to 1869. It employed around 5,000 people at the turn of the 20th century, but it eventually closed in 1983. 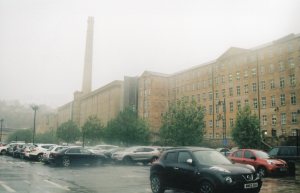 The mill was redeveloped in the 1980s, in a similar way as Salt’s Mills in Saltaire (it was actually one of the first mills in England to undergo redevelopment, and it paved the way to many other regenerations). The huge buildings were turned into office spaces and leisure areas, with a theatre, a hotel, cafés and restaurants. D Mill houses art galleries and a souvenir shop and library.

Some of the galleries present permanent exhibitions, showing the private collection of Dean Clough. Most of the rooms are dedicated however to temporary exhibits, with a focus on contemporary British art. The whole place is huge and there are pictures hanging everywhere, from the standard exhibition halls to office corridors. Some paintings can be bought. Open daily, free entry, see website for details.

Halifax has three museums. The main one is Bankfield Museum, which is dedicated to local history and more specifically the textile industry. It is set in a former villa north of the town centre. There is also a large exhibit about the local Duke of Wellington’s Regiment (website). In the town centre, just behind the Piece Hall, there is the Calderdale Industrial Museum, which is small and only open on Saturdays (website). Next to the station, Eureka is a children museum of national significance focusing on science (website).

Just outside of Halifax, the Tudor manor of Shibden Hall should not be missed.