Nostell Priory is a beautiful house located near Wakefield. There is nothing left of the old medieval priory which gave its name to the estate, but it is instead the typical English stately home, with a large park and lavish interiors. It is not too big either, but it is perfect to spend an afternoon. It is managed by the National Trust. It is possible to visit the grounds for free; admission prices to the house depend on the season, with peak and off-peak tickets (full-price peak ticket is £11.60), see the website for details. The house is closed Monday and Tuesday.

Nostell Priory is located 6 mi from Wakefield and 18 mi from Leeds. It can be accessed by public transportation from Wakefield, with buses 496 and 497 to Doncaster or 485 to South Elmsall). Fitzwilliam train station is not too far (there is a 30 min walk between the station and the house). 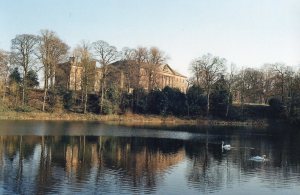 The place bears the name of a medieval priory which was closed during the Dissolution of Monasteries in the 16th century. The house was built in 1733 and it is in the Palladian style of the period. The interiors have mostly kept their original appearance and so it is very authentic. In line with the Georgian taste, the rooms are quite sober. There is a large collection of Chippendale furniture. Visitors can see the service rooms downstairs, with the kitchens and the bell board, which is just like in Downton Abbey.

The park is pleasant, with a lake, woods, an old chapel, a folly in shape of a pyramid and some nice perspectives.