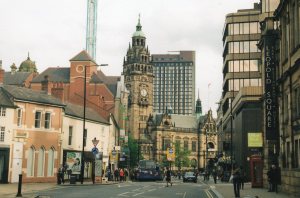 Unlike most British cities, Sheffield has never had much monuments and public squares. Despite the city’s prosperity in the industrial age, Sheffield has always kept it low profile and has never claimed to be a prestigious city. Although this has resulted in the city not having many sights for tourists, it has also allowed it to remain the ‘largest village of England’, as Sheffield is often nicknamed. Even though the pedestrian area in the centre is pretty ordinary, Sheffield can still be a nice place to visit. Indeed, it is dotted with many lovely corners and reminders of the local history. 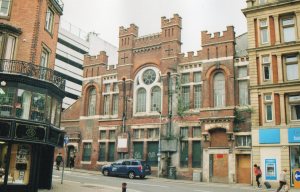 The city was partly destroyed during the Blitz and post-war reconstruction was sometimes quite drastic. Outside of the centre, the city is also very varies, with leafy residential neighbourhoods, wooded areas and vast industrial parks.

Sheffield city centre is quite large and comprises very distinct areas. The main shopping precinct runs north to south from Fargate down to The Moor. Although Fargate is part of the Old Sheffield, The Moor is quite unremarkable, with the usual department stores and a new market hall.

Inside the City Hall.

Right between Fargate and The Moor stands the Town Hall, built in 1897. It is quite impressive but also graceful. A statue of Vulcan stands on the top of the main tower, reminding the importance of metal processing in Sheffield. Next to the Town Hall is the City Hall, a concert hall completed in 1920. There are some interesting old streets behind the Town Hall and around the Catholic cathedral. On Tudor Square stand the Crucible Theatre (1971) and he Lyceum Theatre (1893) which form Sheffield’s own ‘Theatreland’. The Crucible hosts the World Snooker Championship every year. 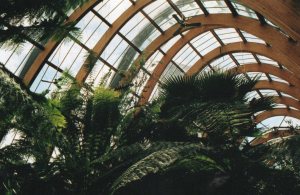 On Tudor Square there is also an entrance to the Winter Garden, a glasshouse opened in 2003. Although it is not massive it is supposed to be the largest urban glasshouse in Europe and it has quickly become one of Sheffield’s most recognisable symbols. The Winter Garden is adjacent to the Millennium Gallery, a series of rooms where high-quality temporary exhibitions are held in partnership with the V&A and the Tate Gallery (see Museums in Sheffield). 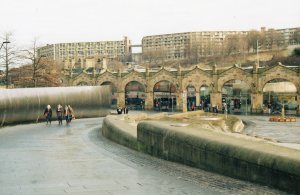 The train station and Park Hill.

Below the city centre and near the bus station stands the oldest building in Sheffield – The Old Queen’s Head is a pub set in a 15th-century house. It is oddly surrounded by concrete blocks and towers, and by the massive Park Hill council estate. Built in the 1950s, the estate is one of the UK’s largest and it is now listed. Right below is the main train station, built in 1870. 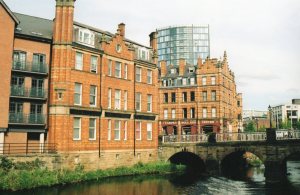 The Old Sheffield is to be discovered around the Cathedral and the site of the former castle, which was destroyed in the Civil War. The castle stood at the point where river Sheaf flows into the Don, but the place is not very obvious as the Sheaf has been vaulted in the city centre. It even forms part of a huge storm drain, called Megatron. The castle was once one of the biggest in the country, and Queen Mary of Scots was imprisoned there for some time. 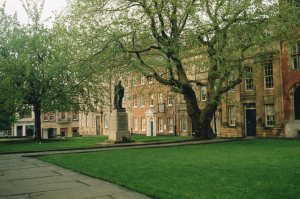 East Parade behind the Cathedral.

Sheffield Cathedral is quite an interesting building. It was a simple parish church until 1914 and its earliest parts date back from the 13th and 15th centuries. It was extended in the 1960s but the concrete addition is quite harmonious. Having been the place of burial of the Earls of Shrewsbury since the Middle Ages, it contains quite a number of funerary monuments. 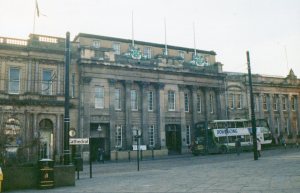 Just in front of the Cathedral is Church Street. On the south side stands Cutlers’ Hall, which is quite unassuming from the outside. It is however one of the most important buildings in Sheffield as it is the headquarters of the Company of the Cutlers in Hallamshire. Built in 1832, it mainly hosts public ceremonies and it can be rented for private events. It is open to the public on Open Heritage Day in September.

There are quite a few nice streets behind the Cathedral – Campo Lane, Bank Street. There is also Paradise Square, a beautiful Georgian square. On North Church Street, do not miss the former 19th-century synagogue. Other old buildings are to be seen around the river Don and the Lady’s Bridge. Victoria Quays are also surrounded by some nice old warehouses.

A street in Broomhill.

Central Sheffield may be a bit of a concrete jungle but the city’s green reputation is more obvious when you walk towards the University and Weston Park. You then reach Broomhill, an area favoured by students but also families, with quiet tree-lined streets and Victorian houses. Broomhill is separated from the centre by the West End, a trendy area full of bars, restaurants and independent shops. Most of these are to be found along Division Street and West Street.

Sheffield is known in England for its old Victorian sewer gas destructor lamps. Looking just like any Victorian street lights, they ran on the gas that accumulated in the sewers. They were very handy because they provided public lighting while avoiding explosions or bad smells. There are still around 20 lamps in Sheffield, which are now listed. Two of them can be found on Victoria Street and on Westhill Lane, two streets of the West End.

There are quite a few green areas around Broomhill. There are Weston Park and the Ponderosa near the University and the magnificent Botanical Gardens south of the area. The Botanical Gardens were opened in 1836 and they have wonderful greenhouses containing plants from most parts of the world – Asia, Africa, America, Australia. The gardens themselves are divided in many different corners – Asian and Mediterranean gardens, rock garden, rosary. 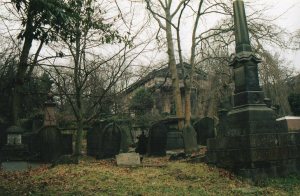 Further away, there are two other great green spaces – Endcliffe Park, opened in 1887, and Sheffield General Cemetery, a former graveyard which was created in 1836 and closed to burials in 1978. The cemetery is now a picturesque place with a great quantity of old tombs hidden by vegetation. Some monuments are quite impressive and there are some famous locals, such as the Bassetts, founders of the confectionary company. Ecclesall Road, which connects Endcliffe Park and the Botanical Gardens to the city centre, is quite a lively road, lined with independent shops and cafes.

Sheffield is an extended city which spreads over many hills and valleys. Apart from the city centre, there are not many places of interest, although some of them are must-dos in the area (such as the Abbeydale Industrial Hamlet; see Museums in Sheffield). East of the centre lie the remains of Sheffield Manor, which was built as a hunting lodge for the Earls of Shrewsbury. Mary Stuart was imprisoned there for 14 years. The manor was part of a large estate which included today’s Norfolk Park. This park is located on a hill which dominates the city centre. It includes the big Cholera Monument and it offers great views on Sheffield. In Meersbrook, an area located south of the centre, there is another Tudor house, the Bishop’s House. Further south, close to Abbeydale, Beauchief Abbey is a former Premonstratensian monastery which closed in the 16th century. The tower is the only remain of the medieval church. 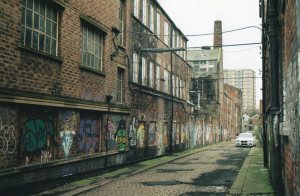 Sheffield has a very rich industrial heritage, which actually forms one of the city’s assets. It is also quite different from the rest of Yorkshire in terms of industrial heritage, as its economy mainly revolved around steel and silver, while the other industrial areas in the county were focused on textile. Sheffield even held a key position during the Industrial Revolution as it was the birthplace of many innovations, including Sheffield plate (layered combination of silver and copper, 1743) and the Bessemer process (for the mass production of steel, 1856). 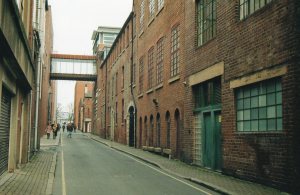 Despite an image of large steelworks spewing dark smokes over the city, the local metal industry mostly remained a family-scale business. Even though most of the workshops have now vanished, there are still some in existence, the Company of Culters still numbering 447 members as of 2018. The local craftsmen were historically called ‘little mesters’, a term which is specific to Sheffield. It is possible to buy local silverware and cutlery at a shop near the Town Hall (Sheffield Scene on Surrey St) or at the Famous Sheffield Shop on Ecclesall Road.

The city centre is dotted with old workshops and former manufactories. A lot are derelict, some have been converted, others are still in activity. Close to the train station, there is quite a good collection of workshops on Arundel St: Cooper Buildings (silver workshop, 1880), Sellers Wheel (1855), Butcher’s Wheel (cutler’s workshop, 1860) and Sterling Works (1870). On Milton Street, between The Moor and West Street, there is also a nice group of former factories (Eye-Witness Works from 1852 and Beehive Works built in 1860) and a terrace of workers’ houses dating from the 1850s. 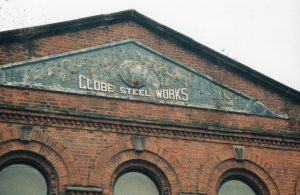 Most of the largest factories (or ‘works’ are they are usually called) are to be found around the Don. The river is not navigable, but it was a great source of energy as well as a natural sewer for the steelworks. The mill on Kelham Island has been turned into a museum (see Museums in Sheffield). Several streets around the island are quite rich in terms of industrial heritage – for instance Green Lane and Cornish Street. Buildings of interest include Green Lane Works, Wharncliffe Works, Globe Works and Cornish Place Works.

Back to the Sheffield page