Wentworth Castle is a magnificent stately home located 3 mi southwest of Barnsley. It is in the small village of Stainborough. Very typical of the English country house, Wentworth Castle was the seat of the Earls of Strafford. The present house was built in the 18th century and it is an architectural jewel. It has been occupied by a school since 1948 and it is not open to the public, apart from rare guided tours. 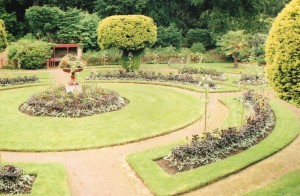 The gardens are managed by the National Trust. Standard adult admission is £8.50. Open daily. See website for more information.

Even if the interiors cannot be seen, the gardens are definitely worth a visit. They are among the best in Yorkshire, both in terms of beauty and maintenance. The best moment of the year to visit is spring, because the gardens are renowned for their magnolias and rhododendrons. The gardens are surrounded by a magnificent deer park, typical of the 18th-century landscaped garden.

In terms of architecture, Wentworth Castle is the perfect 18th-century house, as it shows the two main styles of the period. It replaces a smaller 17th-century house, which was actually a mere hunting lodge for its owners, the Wentworths. At the beginning of the 18th century, the family divided between two branches – the Wentworth-Stainboroughs, who inherited the title of Earl of Strafford but not the main family seat at Wentworth Woodhouse; and the Wentworth-Watsons, who had the house but no title.

The Wentworth-Stainboroughs, represented by Earl Thomas Wentworth, were gutted about not keeping Wentworth Woodhouse, and they decided to build a grander house, some 7 mi away. This house became Wentworth Castle. Because he had been an ambassador in Berlin, he chose to build it in a German Baroque style. In turn, the rivals at Wentworth Woodhouse revamped their house in a similar Baroque style. To surpass again the Wentworth-Watsons, Thomas’s son added a Neoclassical wing to Wentworth Castle. While the older wing is clearly German, the newer one reminds the French architecture of the time.

There has never been any castle here, but the house owes its name to a very strange folly in the park. Built in 1726, it is a mock castle coming with walls and towers. It is one of the first buildings in the world to reuse medieval architecture in a recreational way, prefiguring the Gothick style.

The gardens were first designed in the 18th century but they were partly modified later. There are many flower beds and borders, a large Victorian greenhouse and several follies, including the mock castle and an obelisk. Other follies are to be seen in the deer park – namely a round temple, another obelisk and a column. There is a large herd of deer, which are very easy to spot. Although the landscape was largely impacted by coal mining, it has been partly restored to its former glory.