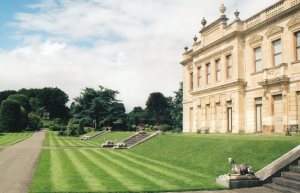 Brodsworth Hall is a country house located 5 mi north from Doncaster. It was built in 1860, meaning it is a proper Victorian house. It is managed by English Heritage, and contrary to most of the stately homes in Yorkshire, it was not restored to recreate a specific period, but instead it was kept as the last owners have left it.

The house is closed in winter, but otherwise it is open daily from 1pm (visitors can still tour the interiors with a guide in the morning). The gardens are open on weekends in the winter. Full-price admission £11.80, see the website for more information.

Inside the house, visitors have access to the state rooms, which fully exemplify the Victorian era. Decor is heavy, with a French influence (Napoleon III style). It is quite faded, with worn out carpets and armchairs, but this it what makes the place atmospheric and interesting. Tours also include more unusual places, such as a 1970s kitchen. Furniture is displayed with a focus on the techniques used to preserve and restore it.

Brodsworth Hall has been open to visitors since 1990. Until then, it was still a property of the Thelluson family who had built it. The house is a perfect example of the crumbling English estates, which were until the early 20th century official places of power, and later became money pits. The present building was built to replace an 18th-century house which was consequently demolished.

From the outside, Brodsworth Hall reminds Italian villas, and the exotic feel of the place is reinforced by the magnificent gardens. There are palm trees, statues, perfectly clipped lawns, and depending on the season, an abundance of flowers. The gardens were restored to their former glory and despite they are not very big, they comprise a lot of different corners, with rock gardens, a rosary and winding paths. The gardens at Brodsworth Hall are without any doubt among the most beautiful in Yorkshire.