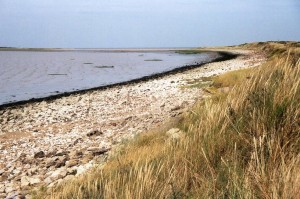 Spurn is a sandy headland located at the very point where the Humber estuary meets the North Sea. It is over 3 mi long, and it has been designated a nature reserve since the 1960s. It is particularly important for seabirds and migrating birds and it is managed by the Yorkshire Wildlife Trust. The access is forbidden to dogs so they do not disturb the birds.

Spurn is one of the most unusual natural sites in England. The headland is very narrow, and at some points, it is just 50 yards wide. When you stand in the middle, you can see on one side the waves of the sea, and on the other the estuary and its marshes. Tides can greatly affect the appearance of Spurn Head. At low tides, wide sandy beaches can be seen on the side of the sea, while neverending expanses of marshland are visible in the Humber. At high tide, all this disappear, and only the top of the headland can still be seen, covered by tall grass. 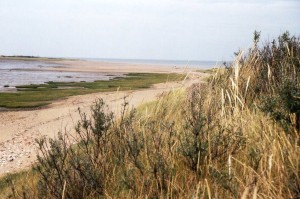 While most of the headland forms a small prominence covered with plants, a part of it is just made of sand. During very high tides, it completely vanishes, and Spurn Head -the very end of the headland- becomes an island. Large signs are here to remind visitors about the dangers of such tides, and volunteers check visitors whereabouts to ensure no one is stuck on the island at high tide. 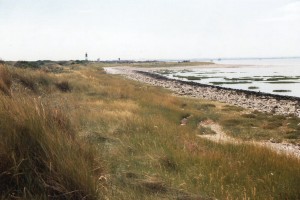 Spurn is formed from an accumulation of sand and clay which comes from the erosion of the Holderness Coast. It is maintained by grass, but strong waves and high tides can sensibly change the appearance of the site. A medieval village, built on the Humber side and named Ravenspurn, disappeared because of erosion. The tip of the headland now comprises a lifeboat station and a lighthouse, built in 1895. The remains of an older lighthouse (1852) can be seen next to it. From the very end of the Spurn, it is possible to spot multiple ships as well as the port of Hull, the Dock Tower in Grimsby and the two Humber Forts, which were built during WWI.

At the entrance to Spurn there is a Discovery Centre managed by the Yorkshire Wildlife Trust. Visitors can find there several exhibition rooms, toilets and a cafe, and there is a large car park next to it. It is possible to explore Spurn on foot, but the YWT also organises ‘Spurn Safaris’ on their special vehicle (full-price tickets at £14, see the website). The neighbouring settlement of Easington is served by bus (line 71 of the EYMS company). 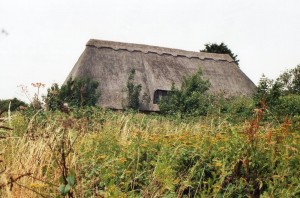 Easington is the closest village to the Spurn (Kilnsea is closer but resemble more a hamlet). It is one of the prettiest villages in Holderness. Its 12th-century church, as well as several houses, were built with pebbles, as no other stone can be found in this flat area. The churchyard contains many tombs from former villages that disappeared because of erosion. The closest vanished villages are Old Kilnsea and Ravenspurn, which were both located south next to the Humber. An old barn, covered with a thatched roof, can be spotted behind the church.

Between Easington and Spurn, there is the Kilnsea Wetlands reserve. Comprising marshes and small lagoons, it was artificially created to replace natural wetlands which were destroyed by coastal erosion. The area is popular among local birdwatchers, and there is also a WWI sound mirror.