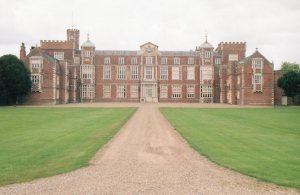 Burton Constable is definitely one of the grandest houses in Yorkshire. It should not be confused with the equally beautiful Burton Agnes Hall, located near Bridlington, nor with Constable Burton Hall, a much smaller house in North Yorkshire. 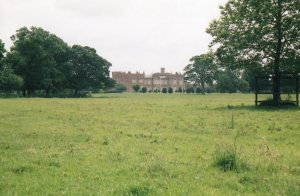 If you are coming by public transportation, you can arrive at Sproatley, which is served by buses 277 from Hull. Then there is a 1.5-mi walk to the house. Burton Constable Hall is open from April to November and around Christmas. The grounds are open in the winter. Full-price admission is at £11.50 and it is possible to only visit the grounds and stables for £6.50. See the website for more information.

Burton Constable Hall was built at the end of the 16th century and it is very typical of the Elizabethan period in terms of architecture. However, despite its harmony and symmetry, it was enlarged in the 18th century.

While the house was being enlarged, every room in the older part was redecorated by the owner of the time. Instead of refurbishing them in a fashionable style, he tried to recreate Elizabethan interiors. The result is quite spectacular and opulent and it can still be seen in the great hall and in the gallery/library. Most of the rooms were nonetheless redecorated in the Victorian period. Since then, a large part of the house displays a very Victorian decor, which is quite heavy and gaudy.

Visitors can explore freely a large part of the house. Two floors are open to the public, and rooms include the (Catholic) chapel, some of the servants’ quarters, the dining room, bedrooms, and a stunning curiosity cabinet, full of shells, fossils and science instruments.

The estate possesses very large stables in which visitors can see several rooms. There used to be a school for horse-riding, and there is a big indoor riding area. A barn shelters the skeleton of a sperm whale which was found on the coast in the 19th century. The animal is mentioned in Moby Dick.

The park was designed by Capability Brown in the 18th century. The famous landscape architect probably had a lot of work to turn the very flat land into what it is now. Despite the horizontality of the Holderness plain, he managed to create a series of perspectives framed by groves and pastures. The estate also comprises an orangery, a lake and a bridge. Unfortunately, the views on the lake are quite ruined by the neighbouring campsite.