Hornsea is one of the few seaside resorts of the East Riding of Yorkshire. It remained a fishing village until the Victorian era, when it became resort popular with residents of Hull and the region. Nowadays, it is a peaceful place, largely forgotten by local holiday-makers. The local train station closed in the 1960s, but there are buses to Hull (240), Beverley (246) and Bridlington (130).

The town is small and it is not really interesting in terms of architecture. The seafront, recently rebuilt in concrete to fight erosion, is rather unattractive. There are no nice villas or grand hotels to contemplate. The old village can be found a bit further back. It comprises the old 13th-century church and a manor.

Hornsea is mostly known for its lake, Hornsea Mere. It is the biggest lake in Yorkshire, and the last remain of a vast expanse of wetlands which once bordered the Holderness Coast. It is 2 mi long and 0.75 mi large, for a maximal depth of 12 feet. Although it is very close to the sea, it is a freshwater lake, home to hundreds of ducks, geese and other migratory birds. Hornsea Mere is located right behind the old village and it has a small nautical base. 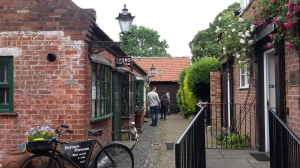 Hornsea Museum is located on the main street. Set in an 18th-century farm, it is dedicated to local history, with displays of local pottery, and life in the Victorian era. Full-price admission £3.50, open from March to October, see the website.

Back to East Riding page