Howden is a small town in the East Riding of Yorkshire, located between Selby and Hull, and close to Goole. It is right in the middle of the Humberhead Levels, a flat and marshy area which borders the Humber estuary. Howden has its own train station, but it is located well outside the town, some 1.5 mi to the North, in the middle of nowhere.

Howden can be seen as the stereotypical English country town. It is furthermore quite lovely and tidy, and few towns in the region are as pleasant as Howden. It was actually chosen by the Press Association – the largest UK news agency, as one of its seats. 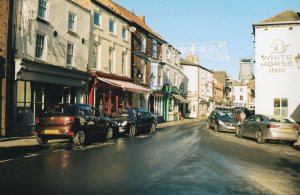 The old town is rather small, but it boasts a large number of Georgian houses, all built with bricks. The market square and Vicar Lane are particularly charming. Because of its atmosphere and architecture, the old town of Howden can easily remind the cobbled streets of York. 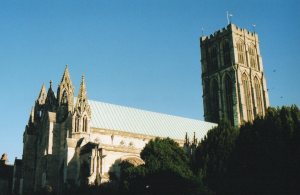 The main landmark in Howden is the Minster, a large church whose bell tower can be seen miles around. It is 135-foot high. Originally, the church belonged to monks from Peterborough, and it obtained the status of a collegiate church in 1267. The building as it can be seen now mainly date from the 13th century, although the tower was finished later in Tudor times. The inside is magnificent, with medieval tombs and a stone rood-screen.

The college was dissolved at the Reformation, and the church slowly fell into neglect, which explains why it is now partially ruined. The choir collapsed in 1696 and the chapter house lost its roof in 1750. Built in the late 14th century, Howden chapter house was the last one in England to adopt a polygonal form. It used to accommodate the meetings of the assembly responsible for maintaining the church. Such buildings are more frequent in cathedrals – York Minster also has a polygonal chapter house.

Behind the church is the former Bishop’s Manor, which belonged to the Bishops of Durham. Only a part of the medieval building survives, the rest being Georgian. 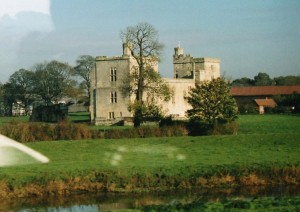 3.5 mi from Howden, on the way to Selby, you can see Wressle Castle. Built in the 14th century, it is the only real castle of the East Riding, even though it mainly had a residential role. It is now ruined. It is private and not open to visitors.